What Is A Tagine Pot

At its most basic, a tagine is a Moroccan pot for cooking. Traditionally, nomads in Northern Africa used a tagine as a portable oven. The word tagine refers both to the dish that is made in it (tagine dish) and the pot in which the food is cooked (tagine pot). In this post, we are talking about the cooking vessel, although we also include tips on how to best use one.

A tagine is a conical pot. This means that the lid is wider at the bottom and more narrow at the top, like a triangle or a pyramid. When the lid is placed on the wide, shallow bottom the tagine becomes almost like an oven.

When heated, the steam from cooking rises to the top and circulates back down. Because of the constant circulation of steam, the food bastes itself. The food becomes moist and tender.

Where To Buy A Tagine

Of course, an ideal place to buy a tagine is in Morocco. Understanding this isn’t always possible, it’s now easier than ever to buy a tagine online. Even if you visit Morocco, it’s kind of a pain to buy and carry a tagine home or have it shipped.

We cover everything in detail below, including a full review of each recommended tagine pot. If you are short on time, though, feel free to use the table below to find our top picks.

Also, we recommend Amazon for purchasing your tagine. First, Amazon sells a variety of Moroccan cooking tagines, at every price point and to match any kitchen decor.

Second, we try to recommend products that are part of Amazon Prime, which provides purchasers with free and often super-fast delivery. (Get 30 days of Prime free here.) In some cases, the recommended tagines are not Prime just because we focused on quality more than ease.

What Is A Moroccan Tagine Made From

Traditional tagines were not glazed and always made of earthenware. Today’s modern tagines are made of all sorts of materials to meet the demands of modern home cooking. Some of them are elegantly decorated and others are more basic. The more decorative they are, chances are they are made for serving and not cooking.

A clay tagine is the most traditional variety. They can come either glazed (which looks shiny) or unglazed. When in Morocco, we saw mostly clay, ceramic, or terracotta tagines.

Many cookware companies now are making tagine pots in different materials. This includes options for a cast iron tagine, or even metal or aluminum. There are pros and cons to the different materials. It depends on your cooking style. Some of them are quicker to heat up and are easier to care for.

We include in our recommendations tagines made from each of these materials to provide options depending on your needs.

When choosing a tagine for your home, and learning how to cook with it, every tagine works differently. If you are not used to cooking with a tagine, then a glazed tagine is the best way to start. Glazed tagines are often more expensive, but much easier to cook with.

How We Learned About Moroccan Clay Pots

While on our food tour in Morocco in 2019, we ate a lot of tagine. Most travelers to the country do. We also, though, toured a factory outside of Fes that made all sorts of traditional Moroccan tagines.

They walked us through the process, step-by-step. The artisans were hand making tagines, from small decorative ones, to large family style Moroccan cooking vessels.

The most important thing we learned while touring the Moroccan factory was not that all tagines are cookware. There are two main types of tagines, even when purchasing them in Morocco.

Some of them are meant to be tagine cooking pots, where you can actually cook on a stove top in the pot. Others are decorative. They are meant for serving tagine on the table. See the photos above for the difference.

Curious about travel in Morocco? Check out our other posts:

Traditional Moroccan Food – What To Eat When Traveling In Morocco

How To Book A Food Tour In Morocco

Reviews Of The Best Moroccan Tagine Pot For Home

Tagines come in different sizes. As a frame of reference, a one quart small tagine is smaller and can steam couscous or cook small tagine portions. A large tagine pot is normally around four quarts or more. These are best when cooking for larger families or when cooking stews and roasts.

Produced in France since 1850, Emile Henry has been an industry leader in a large range of high quality ceramic cooking utensils. The Emile Henry Tagineis made of HR Ceramic and manufactured using Emile Henry’s proprietary Flame technology.

This ceramic tagine is designed for use on the stovetop, broiler, oven, microwave, or grill, up to 500°C. It features a tall, conical lid that locks in steam and continuously bastes throughout the cooking process. The tagine is durable, scratch-resistant, and virtually nonstick.

The Emile Henry tagine is dishwasher safe or easily cleaned with soap or water. The tagine comes with a 10 year guarantee against manufacturing defects when used in a household environment. 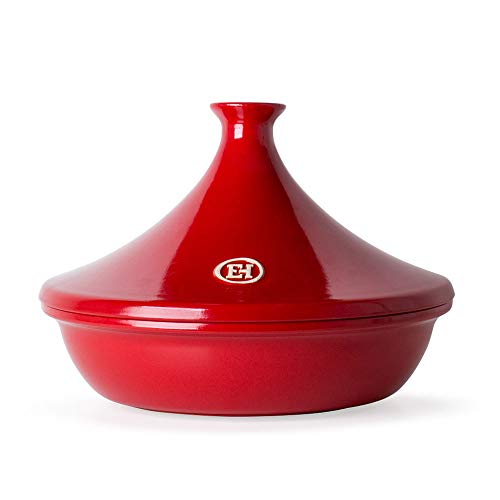 Details: 2.1 Quart, Available in other sizes and colors

Manufacturing in France since 1925, Le Creuset cast iron has been recognized for its strength and durability. The 2.5 quart Moroccan Tagine by Le Creuset is made of enameled cast iron and colorful stoneware.

The Le Creuset’s cast iron base is designed for browning meats and vegetables. A durable interior enamel requires no seasoning. While the stoneware lid circulates heat and moisture.

The cast iron tagine pot design is versatile enough to be used on any heat source. It also works as a tagine for an induction hob. It’s also safe for use in the oven or on the grill with temperatures up to 500°F. Hand washing only, the Le Creuset tagine comes with a limited lifetime warranty. 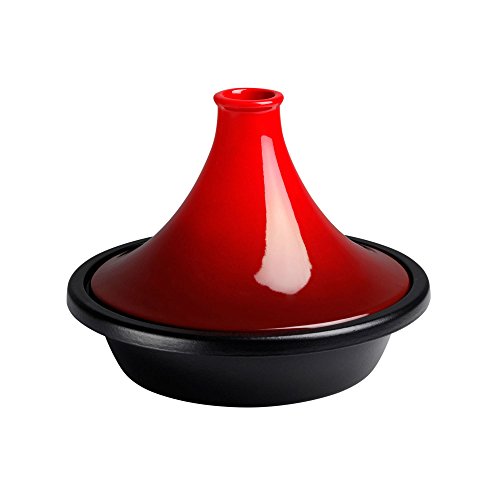 Bruntmor’s 4 quart cast iron tagine is perfect for various types of cooking. From one of the leaders in cast iron cookware, the Bruntmor Tagine features an enameled cast iron pot base and traditional cone-shaped tagine lid. This combination locks in steam and flavors while cooking. Versatile, the Bruntmor tagine performs well cooking on low and high temperatures. Its cast iron construction can withstand temperatures up to 500°F.

The Bruntmor tagine can be used on a variety of cooking surfaces including gas, electric and induction. The tagine is also safe to use in the oven or on a grill. It’s 30% lighter than other types of cast iron pots, the Bruntmor tagine is dishwasher safe or simply clean with soap and water.

The Bruntmor requires little to no seasoning and comes with a limited lifetime warranty. 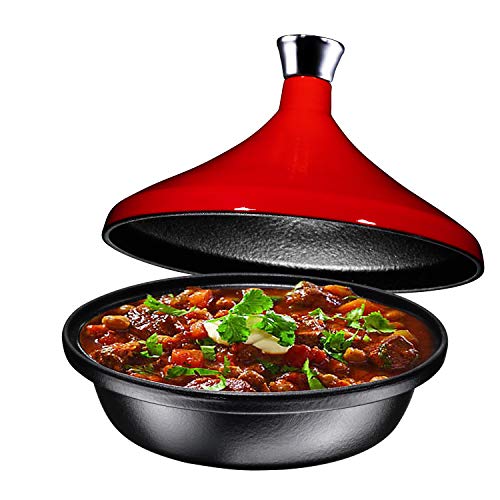 Details: 4 quart, so a little larger, available in a variety of colors

Made in Portugal, the tagine works on a number of different stove tops as well as in the oven, up to 400°F. The traditional design of the Sur La Table tagine helps lock in steam and flavors when cooking.

Seasoning the tagine before use is recommended as it will remove any earthenware taste. Hand wash only. The Sur La Table tagine comes with a limited manufacturer’s warranty. 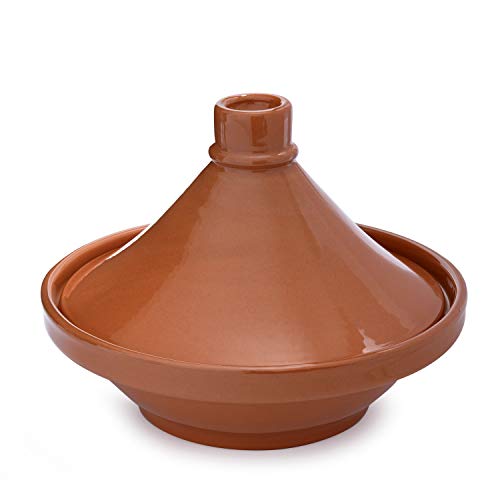 Details: 8.5 inches at the base, only in terracotta color

Handmade in Tunisia, Kamsah prides itself on producing the finest quality artisan cookware products. The Kamsah ceramic tagine is designed for both cooking and serving.

Featuring a traditional tagine design of a wide and shallow cooking base and conical lid, the Kamsah tagine seals in steam and flavors. The tagine can be used on a variety of cooktops including gas and electric.

It’s also safe to use in the oven, up to 500°F. Its hand painted exterior make the tagine a perfect gift for food lovers and home cooks. Each ceramic plate is handmade in Tunisia by a woman owned company that specializes in custom crafted platters and trays. 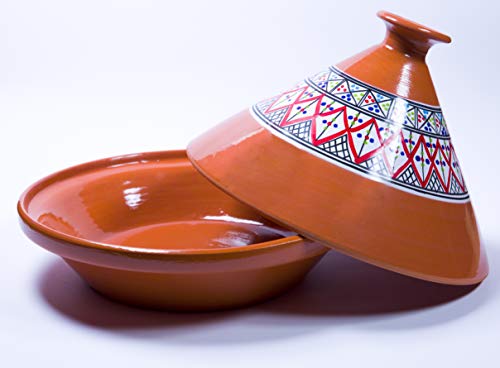 Details: Larger size and hand made in Northern Africa

Raphel Rozen’s 12 inch clay Moroccan tagine is handmade in Tunisia by skilled craftsmen. Featuring the iconic conical lid and shallow base, this tagine seals in the steam and flavors unique to tagine cooking.

The natural clay materials used in making the Raphel Rozen Tagine, helps to enhance the flavor and preserves more of the nutritional value of cooked foods.

The tagine is safe to use on a wide range of stove tops at low temperature. It is also oven-safe up to 300°F. The Raphel Rozen tagine is not safe for dishwasher or microwave use. Prior to the first use, the tagine needs to be completely submerged in water for at least 1 hour. The tagine comes with a four starter recipe booklet. 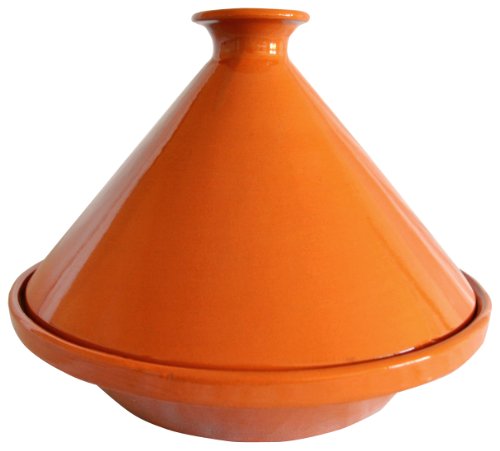 Its tall cone lid seals in flavor, moisture, and nutrition when cooking. An optional tempered glass lid is included. Induction compatible, the tagine works on a wide range of stove tops including gas and electric. The Cooks Standard tagine is oven safe up to 400°F.

It might not be the most traditional tagine pot, but it is quick and easy to clean by hand or is dishwasher safe. A limited lifetime manufacturer’s warranty is included. 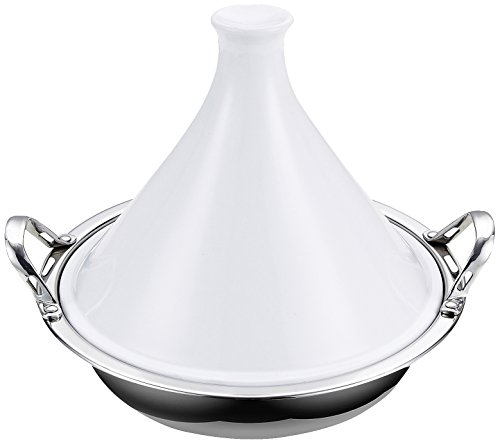 Details: 4.5 Quart, contemporary design, easy to use, with two handles for easy movement

Is A Tagine Worth It?

If you have the space to store a tagine, it’s a great investment. We’ve been cooking a lot of Moroccan cuisine since returning home from Morocco and simply loving it.

The great thing about a tagine is that it’s not limited to just cooking tagine. You can make couscous, rice dishes, and bean dishes too. It can be used to cook roasts and even bread. It can also go right from the stovetop or oven to the table, making it very convenient.

And if you entertain, it’s certainly a show stopper to serve a tagine with the lid on and then remove it tableside with a bit of flair.

Pin It To Save For Later

The Best Moroccan Tagine For Home

Save this to your favorite kitchen or homeware board on Pinterest to save for later. We will continue to update this guide as we find more recommended products.

See some of our related posts:

The Best Paella Pan For Your Home

Do You Travel For Food And Drink? So Do We!

Learn more here: For The Home

Latest Posts
We use cookies to ensure that we give you the best experience on our website. If you continue to use this site we will assume that you are happy with it.OkPrivacy policy