The Portuguese have a relationship with pastries and desserts that could rival the French and Italians. Here are some of the best Portuguese desserts recipes, all of which you can make at home.

What Is Portuguese Food?

Portuguese food is one of the most underrated cuisines in Europe, if not the World. We’ve been in love with Portuguese food ever since our first trip to Portugal in 2009.

Enjoying a bifana sandwich and clams “a bulhao pato” from Cervejaria Ramiro is a must every time we visit. Another culinary must is diving into the many delicious Portuguese Desserts. Here, we share our recommendations for the best Portuguese dessert recipes.

Bordering a culinary powerhouse like Spain has its pluses and minuses. Portugal shares a similar climate and geography to that of Spain. As a result, many of the same crops like olives, tomatoes, and fruits are grown. Like Spain, Portugal enjoys easy access to the sea and its rich bounty of seafood. And both countries share a long history of outside influences leaving their mark on the cuisine and this includes desserts!

Want to learn more about traveling in Portugal for food? Check out these related posts:

What To Eat In Lisbon

What To Eat In Porto

While there are many similarities between Spain and Portugal, don’t make the mistake of thinking that Spanish food and Portuguese food are the same. This is a big no, no, and couldn’t be further from the truth. Even though they are neighbors, the Spanish and Portuguese will each tell you their food is better than the others, their wine is better, and their national football team is better.

Much like Spain, the food of Portugal is regionalized. Dishes popular in Lisbon and the south are less so in Porto and the north. And vice versa. One such example is the bifana versus the francesinha sandwich. Invented in Porto, the francesinha is the preferred sandwich of choice in northern Portugal, while the bifana rules the South. This is not to say you can’t enjoy either sandwich throughout Portugal.

Another layer to Portugal’s regionalized cuisine are the Azores and Madeira. Situated in the middle of the Atlantic Ocean, the islands have belonged to Portugal for hundreds of years. The food found on both islands is naturally dominated by seafood. The dishes themselves are rustic and simple using only a few ingredients.

What Are Portuguese Desserts?

Portugal was one of the early European nations to explore and colonize the globe. Its overseas empire included Brasil, Macau, Goa, and parts of Africa. The spices and ingredients from these colonies had a lasting effect on Portuguese cuisine including Portuguese desserts.

As one of the oldest countries in the world, it’s no surprise that many Portuguese dessert recipes date as far back as the 15th century. As more Portuguese traders brought spices and most importantly sugar back to Portugal, dessert making took off.

Many famous Portuguese cake and dessert recipes were developed by nuns and monks. Often referred to as “monastic desserts,” sweets such as barriga de freira (nun’s belly) and papos d’anjo (angel’s double chin) trace their origins back to the Middle Ages.

Like most Portuguese recipes, traditional Portuguese desserts only consist of a few ingredients. Proving again that you don’t need a ton of ingredients to make something delicious.

Here are some of the most traditional Portuguese desserts. You can find the specific recipe at the bottom of the post.

When I hear the words pastel de nata my knees get weak and my stomach grumbles. Pastel de nata might just be the most famous Portugal food item.

For us, no trip to Portugal is complete until we eat a dozen or so of these unforgettable Portuguese pastries. Filled with creamy egg custard, these tasty tart pastries are distinguished by their semi-burnt crust. Dusted with a little cinnamon and welcome to Portuguese dessert heaven.

While I can’t get enough cheesecake, for Amber it’s rice pudding. It doesn’t matter if it’s Spanish Arroz con Leche or Portuguese Arroz Doce, if it’s on the menu she’s ordering it. Made using rice, milk, sugar, citrus zest, cinnamon, and most importantly egg yolks, I can’t blame her.

Variations of rice pudding can be found in regions across the world. Each version has its own regional twist like using coconut milk or adding spices including saffron. What makes rice pudding Portuguese, is the liberal use of egg yolks. Arroz Doce uses more egg yolks than your typical rice pudding. The result is a more rich rice pudding.

Also known as “sawdust pudding,” serradura is a pudding dessert made using condensed milk, Marie biscuit crumbs, and whipping cream. The crumbled Marie biscuits are what give the dessert its nickname. The biscuits appear to resemble sawdust inside the pudding.

The dish is believed to have been invented in Portugal and brought to Macau, a former colony, where it remains popular to this day.

Serradura is similar to another biscuit based Portuguese dessert, bolo de bolacha. The main difference between the two is the use of buttercream not condensed milk in the bolo de bolacha.

Like making desserts at home? Check out these recipe round ups:

Dessert Recipes Made With Coffee 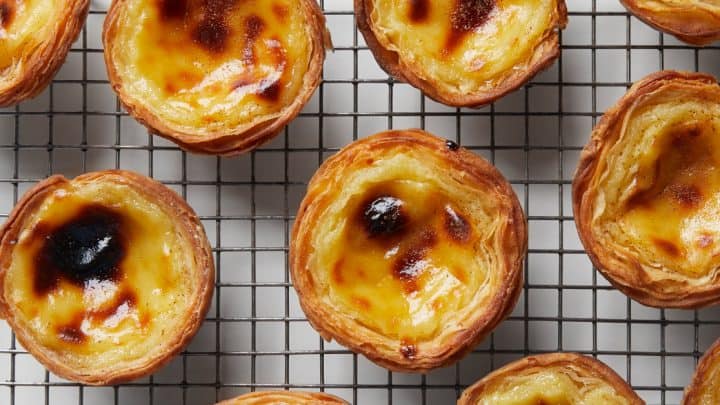 Another famous Portuguese dessert often referred to as "sawdust pudding", this Serradura recipe is the perfect treat. It's light, creaming, and refreshing. Best of all, easy to make. Portuguese cakes are not to be missed including this cream chocolate cake recipe. Perfect for when the sweet tooth has a craving or just because. Light, creamy, airy, and best of all made with chocolate this Portuguese Chocolate Mousse recipe is the perfect treat for young and old. Not sure what to do with stale bread? How about this Portuguese bread pudding recipe? Light, refreshing, and with a hint of cinnamon, what a tasty dessert. 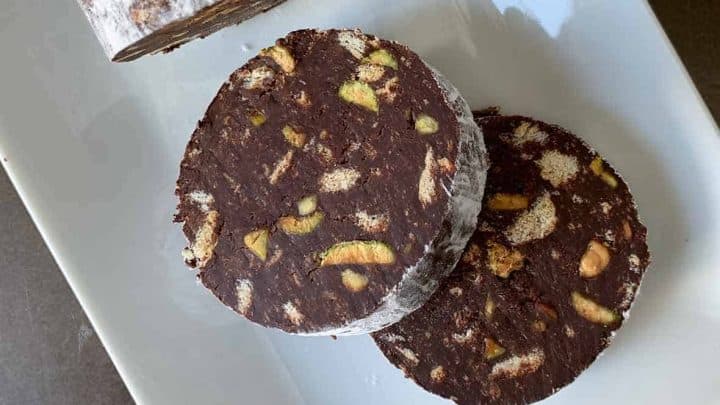 No, you are not reading that wrong. Portuguese chocolate salami is a real dessert and a Portuguese treat not to miss. Packed with nuts and dried fruits, complimenting the tasty chocolate. 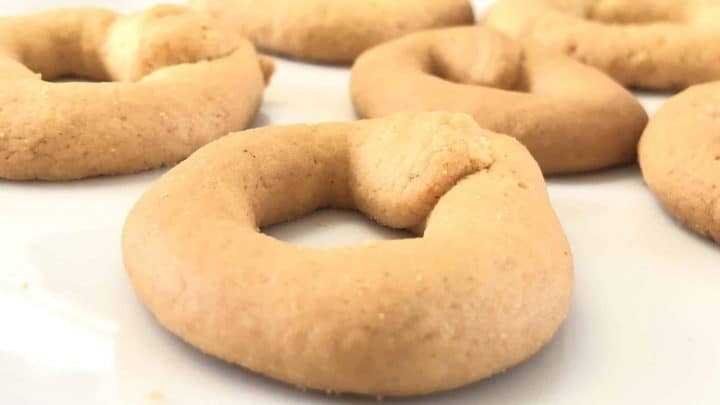 Perfect with a nice hot cup of coffee, these Portuguese biscuits are flaky, light, and easy to make. 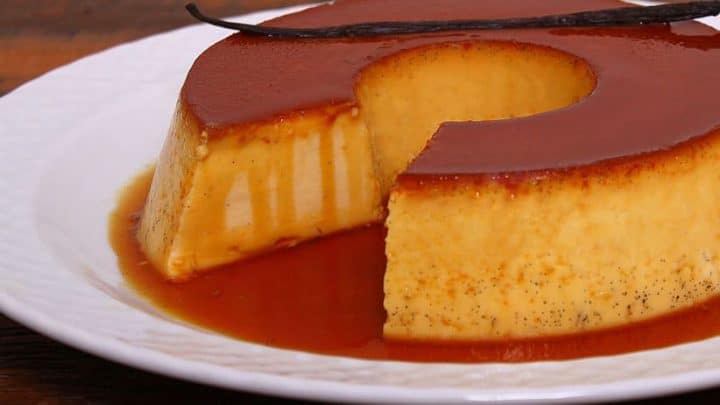 The perfect dessert for a warm summer day or frankly any day. This Portuguese flan recipe is easy to make and sure to please. A personal favorite, this Portuguese dessert recipe combines rice, eggs, and best of all cinnamon into a refreshing a light dessert. Needing only five ingredients, this Portuguese Milk Tart recipe is easy to make and highly addictive. You've been warned. While not technically a dessert, this Portuguese bread recipe is sweet enough that you'll think you are eating dessert.

What are some Portuguese desserts?

For starters, there are too many to name. But some of the most popular include Pastéis de Nata, Pao De Lo, and Azorean Biscoitos. Portugal is famous for being home to some of THE best desserts in the world.

What pastry is Portugal known for?

Without any doubt or hesitation, the pastry that Portugal is known for is Pastel de Nata (Custard Tarts). These creamy egg tarts are found everywhere in Portugal and are perfect for breakfast, a snack, or desserts. A pro tip is to enjoy them with a glass of Portuguese Port wine, trust me.

Amber Hoffman, the food and travel writer behind Food And Drink Destinations and The Bean Bites Recipe Blog, is a recovering attorney and professional eater, with a passion for helping people travel for food and drink. She lives with her husband, Eric, in Limerick, Ireland, after spending three years living in Spain. Together over the last 20 years, they have traveled to over 70 countries in search of the best food and drink. Amber also loves cooking at home, from traditional Spanish and Moroccan recipes to exploring dishes from Japan and Korea. She's learned all of these recipes while traveling to classic culinary destination.