We know a good amount about eating in Andalusia, Spain. I figured when researching about Malaga food that it would be similar to the rest of the region. When check out the Malaga tapas bars, though, we were a little surprised not only at some of unique dishes to this coastal city, but just how good the food in Malaga really is. How To Find The Best Tapas Bars In Malaga

I was a bit concerned about what we would find when it came to food in Malaga. We knew Malaga as a winter destination for northern European snowbirds, including our friends and family from the UK and Ireland. It certainly is that. But, I thought what we would find would be Irish bars, chip shops, and a watered down Malaga menu with generic Spanish tapas.

Not only did we eat traditional and authentic versions of typical Spanish tapas, but we also ate some unique Andalusian tapas. In this Malaga tapas guide, we share our recommendations on what to eat in Malaga and how to find the best tapas in Malaga city.

We might not share a comprehensive Malaga restaurant guide, but this should be everything you need to know to eat well during a holiday in Malaga city.

In this Malaga food blog post, you will learn: 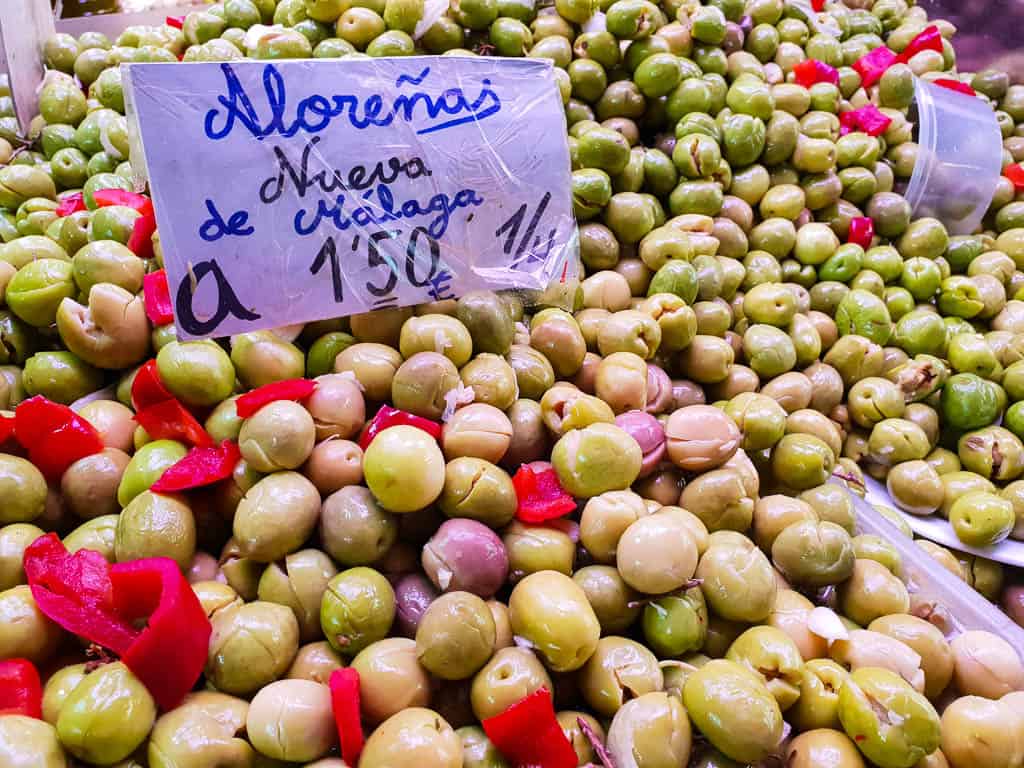 What Is Andalusian And Malaga Cuisine

I have one goal with all of our Andalusia travel guides. It’s to inform travelers to the region that there is more to Spanish cuisine than sangria, paella, and churros. Spanish food is regional in the same way American cuisine traditionally was. Lobster rolls from New England, gumbo from Louisiana, and seafood chowder from the Pacific Northwest. Similarly, Catalan food is different from Basque cuisine, and both are different from Andalusian cuisine.

For anyone traveling to Malaga for food and drink, we want to share recommendations on what to eat in Malaga. This is to avoid the trap of eating paella, patatas bravas, and sangria each and every night. There is so much more to Malaga food than that! What To Eat In Malaga Spain – Must-Eat Tapas

In our list of the top Malaga dishes to try, we include mostly Malagan or Andalusian specialties. These are tapas or dishes that you can only find in the province of Malaga, or in nearby cities and towns within Andalusia. For us, it’s these local dishes that really are the best tapas in Malaga Spain.

Traveling to Malaga? Check out our Ultimate Malaga Travel Guide Montaditos are small sandwiches, which are found all over Andalusia. They are a perfect snack in the mid morning before lunch or in the late afternoon before dinner. The montadito pringa is more common in Seville, but can also be found in Malaga.

A pringa is normally made from yesterday’s meat scraps, including shredded pork and bits of morcilla, a blood sausage common in Spain. Morcilla may sound a bit crazy to some travelers, but when added to a pringa sandwich, the taste is super mild. This is actually a good way to try morcilla without doing a deep dive.

Where to eat this montadito in Malaga: This version was huge in comparison to the sandwiches in Seville. Try it at Las Merchanas Malaga, a truly unique Malaga bar. Don’t be scared! Even if you’ve never eaten an anchovy in your life, do so when traveling in Spain. Boquerones are fresh anchovies, and entirely unlike anchovies found in the tin can in the US. These are fresh, often served in vinegar, perhaps with a little garlic and citrus. This is a popular dish throughout Andalusia and became a staple for us when eating out in Malaga and throughout the region. Berenjenas con miel is fried eggplant drizzled in honey or molasses. In Malaga, the eggplant is drizzled with miel de cana, or sugar cane honey. There is a long history of sugar cane production in Malaga, which is why the dish differs just enough to a unique Malaga dish.

Where to eat this Malaga cuisine: It’s easy to find this dish at most Malaga bars. We ate this plate of tapas at Mercado Atarazanas Malaga, the Malaga central market. The flamenquín is more of a speciality of Cordoba, which is north of Malaga. But it’s pretty darn tasty and can be found on the menus at many Malaga restaurants. A flamenquine includes a slice of pork loin, a slice of jamon, and a piece of cheese, which is rolled up and deep fried. This is certainly not a light dish. More often it is served as a racion, rather than a tapa, and is made for sharing. People know gazpacho as the cold tomato soup that is popular around Spain. Just a few hours north of Malaga in Seville, the cold tomato soup is salmorejo. In Malaga, the southern Andalusian version is Porra Antequerana. Porra is also made with tomato and dried bread to make it nice and thick.

Where to eat this Malaga cuisine: Similar to gambas pil pil, this is a common dish or at least a garnish on many dishes in Malaga. We ate this version along with jamon and local, seasonal artichokes at El Tapeo de Cervantes Málaga. Albondigas Almendras, or meatballs with almond sauce, are the most typical tapas in Malaga City. You can find them on almost every Malaga menu, either as a tapa or as a racion, which is a larger portion than a tapa. The meatballs are generally made with pork or beef, or a combination of meats.

Although meatballs are pretty common tapas throughout Spain, the sauce is what sets them apart in Malaga. The sauce includes almonds, which are typical to the region, along with garlic, bread to thicken the sauce, olive oil, and white wine. The flavor is very mild but tasty and creamy. The white wine gives it a little bit of a kick. It’s super rich, so stick to the tapas size.

Where to eat these Malaga tapas: We ate these a few times, but the best ones we ate were at Bodequita El Gallo, just across from the Picasso Museum on Calle San Agustin. 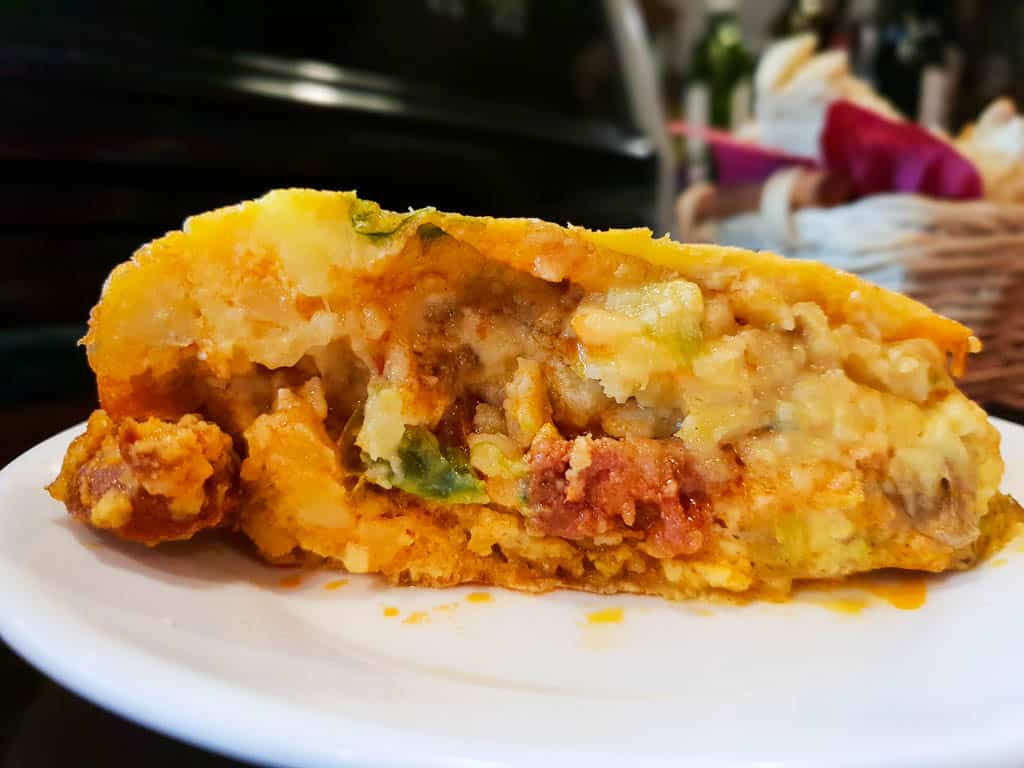 Tortilla is another staple of Spanish cuisine and often is simply served as a potato and egg omelet. Some tapas bars add other ingredients, including onions or chorizo.

In Malaga, there is a speciality version of toritlla. Look for the tortilla sacramonte, which includes eggs, potatoes, and some of the less desirable cuts. This includes pigs or lambs brain. Not for the faint of heart. When eating out in Malaga it’s probably going to be hard not to find this dish on a tapas menu. Prawns or Gambas Pil Pil is almost like the “national” dish of Malaga. It’s one of the most common tapas in Malaga Spain, and all along the coast of Andalusia.

A clay pot is heated with good Spanish olive oil, along with slices of garlic and chili. The prawns are added and coated in the spicy oily sauce. These are a little different from the typical garlic prawns found elsewhere in Spain or in Portugal. The main difference is the heavy dose of spice that doesn’t exist in these other Spanish dishes.

FAQs – How To Find The Best Food In Malaga Spain

Are there free tapas in Malaga?

There is really only one city that still offers free tapas with each drink purchase and that is Granada. Granada is located just north of Malaga. Sometimes a drink will come with some free olives or potato chips, but generally not a free hot tapa.

What are typical Malaga food prices?

The great thing about eating at tapas bars and restaurants in Malaga is that tapas are generally not that expensive. At a traditional tapas bar, a tapa-sized plate will cost between €2-4. A larger portion, or a racion, might cost between €7-10 a plate. Some restaurants will offer an in-between option, called a 1/2 racion or media racion priced between €4-7. The sizes are clearly marked on most Malaga tapas menus. This means that the cost of eating out in Malaga can be pretty reasonable.

Is there Malaga street food?

Not really. European Union regulations has meant that most food preparation and service has moved indoors. The only time you will see a lot of street food will be during a festival or similar event. That said, at most Malaga bars, it’s acceptable to eat and drink just outside the door. Many bars offer a little ledge or some high-top tables even if they don’t have official outdoor seating.

Pin It For Later How To Find The Best Tapas In Malaga Spain

If you are planning a trip to Malaga, pin this post to your favorite Pinterest travel board to save for later. We will continue to update this post and all of our Spain travel content.

Spain Packing List: Travelers Guide To What To Wear In Spain

Do You Travel For Food And Drink? So Do We! Learn more here: For The Home

Latest Posts
We use cookies to ensure that we give you the best experience on our website. If you continue to use this site we will assume that you are happy with it.OkPrivacy policy