We’ve been traveling to Italy together for close to 20 years, but we found Modena Italy only about six or seven years ago. Since that time, though, we’ve returned to the city over and over and explored the countryside around the city as well. We wanted to create this Modena Travel Blog to help you discover this wonderful city.

How To Visit Modena Italy

For us, it is hard to create a Modena travel guide that is not thousands and thousands of words long. After all, it’s one of our favorite cities in Italy, and one that is often overlooked by travelers.

But, since we started traveling to Emilia Romagna years ago, and because Amber wrote a book about the gastronomy of the region, it’s hard for us to be succinct.

In this Modena guide, we share our top travel tips on how to discover Modena, the city of Slow Food and Fast Cars. I also share some thoughts on why you should visit Modena as opposed to its closest neighbors, Bologna and Parma.

Much of this is based not only on the top things to do in Modena city center, but also that it is the perfect jumping off point for some great Modena day trips. How To Visit Modena Italy

For us, it is hard to create a Modena travel guide that is not thousands and thousands of words long. After all, it’s one of our favorite cities in Italy, and one that is often overlooked by travelers.

But, since we started traveling to Emilia Romagna years ago, and because Amber wrote a book about the gastronomy of the region, it’s hard for us to be succinct.

In this Modena guide, we share our top travel tips on how to discover Modena, the city of Slow Food and Fast Cars. I also share some thoughts on why you should visit Modena as opposed to its closest neighbors, Bologna and Parma.

Much of this is based not only on the top things to do in Modena city center, but also that it is the perfect jumping off point for some great Modena day trips.

Learn what to eat in Modena in our Modena Food Guide 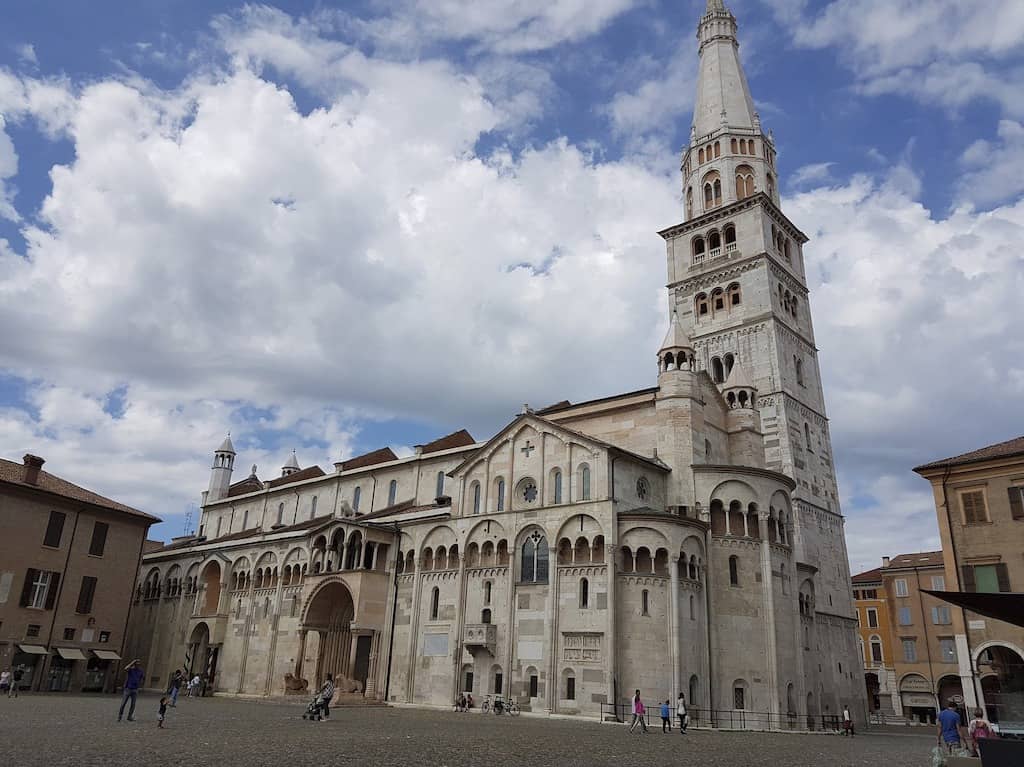 Where Is Modena Italy

There are nine distinct geographic areas, or provinces, within Emilia Romagna, with Bologna at the core. The nine geographic areas from west to east include the five of Emilia: Piacenza, Parma, Reggio Emilia, Modena, and Bologna.

Along the Adriatic Sea, from north to south, the remaining geographic areas within Romagna include: Ferrara, Ravenna, Forli-Cesena, and Rimini. Located about a half hour north of Bologna is the city of Modena.

Modena is home to many of the most iconic manufacturers of high-end performance automobiles including Ferrari, Lamborghini, and Maserati.

Modena is one of the holy trinity of Emilia Romagna cities, which also includes Bologna and Parma. Though Bologna lies at the center of Emilia Romagna, Modena is its heart. It is home to some of the most recognizable of the DOP and IGP products that are certified by the European Union.

It is the land of slow food and fast cars, being home to Ferrari, Lamborghini, and Maserati. Currently, Modena is also the home of the number one restaurant in the World, Osteria Francescana. In the 1990s UNESCO has labeled three sites in Modena as World Heritage Sites. What To Do In Modena Italy – Top Modena Attractions

Modena is smaller, and therefore more manageable, than Bologna. It is easy to walk around, and it seems that all roads lead to the Duomo and the Piazza Grande at the center. At the corner of the arcade that runs along the piazza lies the tourism board to answer questions.

Began in 1099 and completed in 1319, the cathedral is one of the three UNSECO World Heritage Sites in Modena. Constructed in 1634, the Ducal Palace of Modena, is a sprawling Baroque palace and former residence. Today, portions of the palace are used by the Italian Military Academy. There are plenty of options for visiting a Modena museum. For fast car lovers, speed on over to the Enzo Ferrari Museum Modena to learn about the automotive legend. With Ferraris from the past decades, the museum showcases the evolution of this iconic automobile company.

There are plenty of cafes and outdoor dining opportunities, and the city goes crazy for gelato. But, there is one thing about Modena: everything great is outside of the town.

Yes, there are fabulous restaurants and the Mercato Albinelli, but in order to delve deep into the wines and DOP and IGP products that make Modena famous, it is necessary to escape the city.

Although there are some shops in town that offer tastings of balsamic vinegar and Parmigiano Reggiano, it is more difficult to learn the details of how these Modena foods are produced if you are limited to exploring the region solely from inside the town of Modena. Things To Do In Modena For Food Lovers

One of the challenges of traveling in Emilia Romagna is that most of the best food and wine producers, and therefore food experiences, are outside of the main towns. Yes, it is easy to travel by train from one town to another. But, many of the producers are out in the countryside. As part of the 2015 EXPO in Milan, the Modena tourism board realized this was a problem and decided to try out something new. They offered something akin to a hop-on, hop-off bus to explore the land of fast cars and slow food.

Discover Ferrari is a route of Modena food and wine producers, along with some historic sites, which surround the town of Modena. There is a route map, which you can explore using your own transportation, or by using the hop-on, hop off bus system.

Each of the stops offers a free tour or tasting, allowing tourists the chance to try the major Modena foods. This includes Parmigiano Reggiano, Lambrusco, Prosciutto di Modena, and balsamic vinegar. The tour also includes the Ferrari Museums in Maranello and Modena, and Pavarotti’s house and museum. There is no commercial airport near Modena Italy. Travelers visiting Modena generally arrive via Bologna Airport or one of the three airports in Milan. Shuttle bus service from Bologna Airport to Modena is available. A one way fare costs about €15 and are purchased directly from the driver.

How To Get To Modena – Train And Bus

By Train: The Stazione di Modena is the main train station in Modena. The station is approximately a 20 minute walk to the main tourist areas of Modena. From Bologna, the journey to Modena takes approximately 20-25 minutes. The cost of a one way fare is around €4.

By Bus: Travelers can reach Modena from points around Italy as well as international destinations including those in Germany, France and Switzerland. The main bus station is approximately a 10-15 minute walk from the main tourist areas.

Modena is as quaint of an Italian city as there is. With just under 200,000 people the city can easily be explore on foot or on bicycle. Pedestrian paths are found throughout the city making it safe to wander around.

For those planning to drive to or around Modena, the city does have Limited Traffic Zones in place. These zones restrict automobile access to certain parts of the city as well as the times in which they can be accessed.

Fines are given to drivers in violation of these zones. Ask at your hotel where to park and how to best access the hotel. Bus service around Modena is cheap and easy to use. A one zone, one-way ticket costs €1.50. Tickets are bought directly from the driver.

Available for €6, the Modena All Inclusive Ticket provides access to some of the most popular things to do in Modena Italy. It includes access to the Ghirlandina Tower, the Historical Rooms in Palazzo Comunale, Municipal Vinegar Factory, and Cathedral Museums. Children under 5 years of age are admitted free. The card has no expiration date.

FAQs – How To Visit Modena Italy

What is Modena Italy known for?

Expensive cars and great food. Modena is home to supercar manufacturers Ferrari and Lamborghini. It’s also home to some of the best food in Italy including Parmigiano Reggiano cheese.

For the most part, yes. Every town and city has some crime and Modena is no exception. Tourist in Modena are the target of pickpocketers and scam artist and need to be on guard. Otherwise, Modena is a safe city to explore on foot.

How far is Modena from Milan?

Modena is approximately 100 miles for Milan. It can be reach by train, bus, and car. It is not possible to fly to Modena from Milan.