Since we’ve been living in Spain, we’ve been enjoying exploring more of the country. Although Valencia is only a bit down the coast from us, we’ve only visited a few times. It’s a beautiful city on the water, one that we considered moving to. We’ve done a lot of research on the city, though, in order to come up with our Valencia Travel Guide, loaded with the best Valencia tips to help you plan your trip.

How To Visit Valencia Spain

This Valencia travel blog will help you plan your holidays in Valencia, including recommended attractions, sites, and hotels. Also in this Valencia Travel Guide, we include background information on the city and region as well as some top travel tips. We also share some tips on what and where to eat and drink in Valencia.

Where Is Valencia Spain

Valencia is a port city on the east coast of Spain approximately three and a half hours south of Barcelona. It’s the third largest city in Spain with about 800,000 residents. Valencia is the capital city of the region of the same name. The Turia River runs through Valencia and meets the Mediterranean Sea, where some of the best beaches in Valencia are located.

The city is known for its modern architecture, which can be found in some of the top Valencia landmarks. This includes the futuristic City of Arts and Sciences. The birthplace of paella, Valencia is a city mixed with styles and influences from its long history dating back to Roman times. 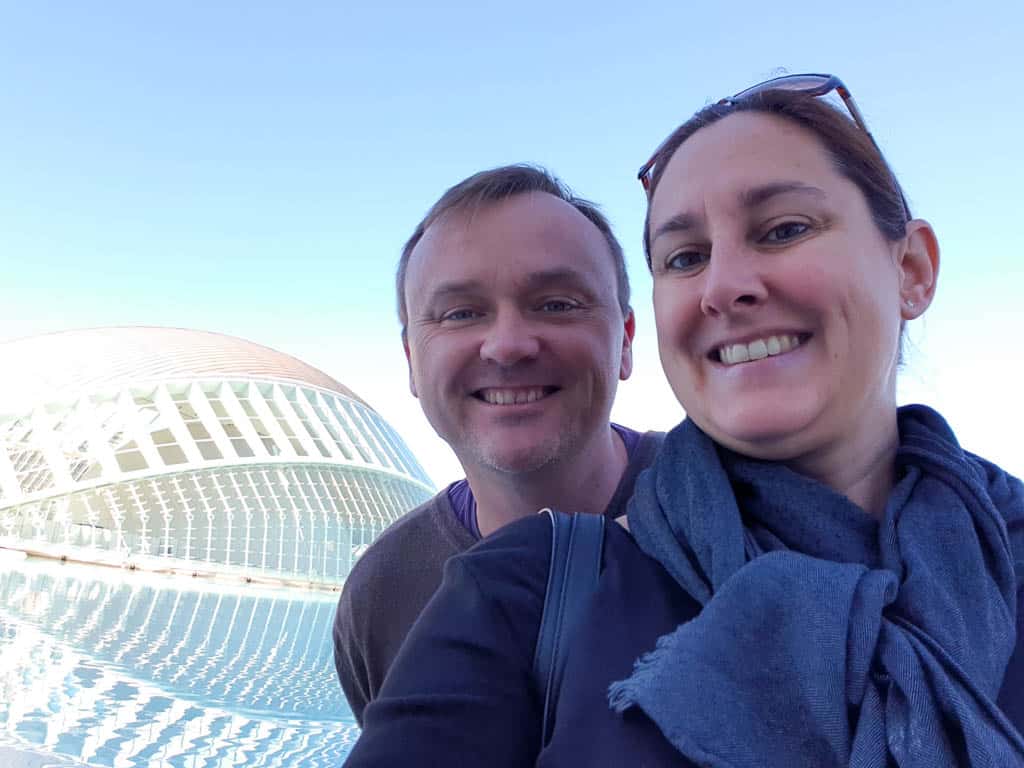 With on average only 40 days of precipitation per year, Valencia is a year-round destination. Winters in Valencia are mild with low temperatures in the mid 50s Fahrenheit, mid teens Celsius. Lasting upwards of eight months, summers are long, hot, and dry. Daily temperature can exceed the mid 80s (30 degrees Celsius) with little to no rainfall. Similar to many destinations in the Mediterranean region, it is best to visit Valencia in the Spring when temperature are warm but not hot like in July and August. Fall is another great time to plan trips to Valencia.

When determining when to visit the city, there are some Valencia holidays and events to be aware of. Like much of Spain, Semana Santa, or the Holy Week surrounding Easter, is one of the busiest times of year.  One of the most popular events in Valencia occurs in March each year. Las Fallas is an event that celebrates Saint Joseph via parades, processions, and fireworks (check out this Guide to Las Fallas to make the most of a visit). The Feria de Julio includes a series of events throughout July that started in the late 1800’s and expands each year. The most famous even of the fair is the battle of the flowers, when women throw flowers from floats that are paraded through the city. What To Do In Valencia – Top Valencia Attractions

There are plenty of attractions and museums in Valencia Spain to keep any traveler busy. May of these attractions also means that Valencia is a great city to visit for families in addition to food travelers. Opened in 2003, L’Oceanografic is the largest aquarium in Europe housing over 500 different species of marine life including sharks, sea lions, penguins, and belugas. The aquarium is located in the City of Arts and Sciences, a vast park with all sorts of museums and attractions in the Valencia city centre.

Llotja de la Seda or the Silk Exchange is one of the most visited attractions in Valencia. Dating back to the 15th Century, this UNESCO World Heritage Site once was the main mercantile trading center in Valencia. Since 1910 the Mercado Central, Central Market of Valencia, has been the epicenter for the buying and selling of fresh seafood, meats, and Spanish produce for residents of Valencia. With over 8,000 square meters of space, it is one of the largest markets in Europe.

Looking for a tour to explore the city, check out one of these tours offered by Viator. We recommend Viator for booking tours because they offer a larger variety of tour options, which can be booked online and confirmed immediately. This means you don’t have to worry about organizing while you are in the city, and you are sure there will be spots available.

Looking to learn how to cook Spanish cuisine at home? Check out our recommendations for the best paella pan for your home. 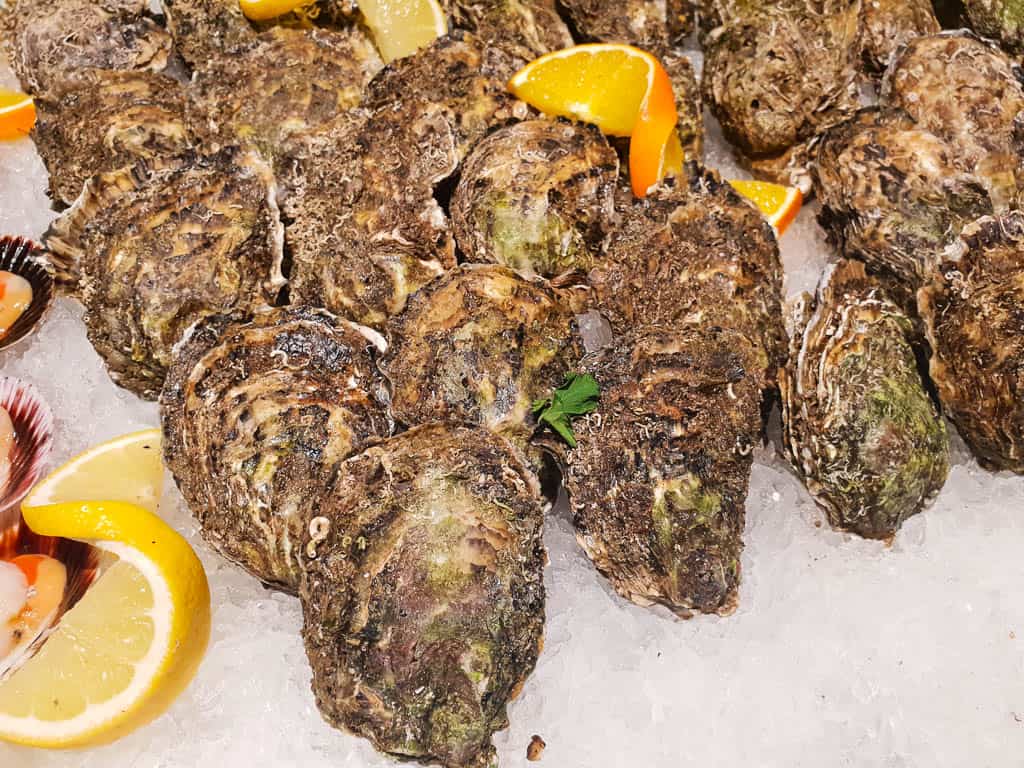 Valencia Travel Tips And How To Get To Valencia

In order to help plan your trip to Valencia, we offer these tips on how to get to Valencia and how to navigate the Valencia city map once you get there.

How To Travel From Valencia  Airport To City Centre

By Bus: The Valencia Airport Aero-Bus is a direct service to the city center. The bus makes five stops between Valencia Airport and the city. Service runs from 6:00 AM until 10:00 PM with buses departing every 20 minutes. One-way tickets cost €2.50. The average journey time is approximately 25 minutes.

By Train: Valencia Airport is served by the Valencia Metro train. At Valencia Airport the Metro Station is located on the ground floor of Regional Flights Terminal. Lines 3 and 5 of the Metro terminate at the airport. Lines 3 and 5 stop at Xativa Station, which is the city centre as well as the main Valencia train station, Nord Railway Station. This journey takes approximately 15 minutes. One way tickets cost €4.90. Lines 3 and 5 continue onto the port of Valencia. Total journey time to the port is around 30 minutes.

How To Get To Valencia – Train And Bus

By Train: Valencia has two rail stations that service destinations in Spain as well as France. Joaquin Sorolla Train Station is the new station in Valencia that provides high speed rail service to Madrid. The journey to Madrid on the AVE takes approximately 1 hour 45 minutes. To reach Barcelona, the journey takes approximately three hours as this service is not the high speed AVE train. Valencia Estacio del Norte is the old train station that mainly provides local train service. Both stations are located in close proximity to the city center.

By Bus: Estacio d’autobusos de Valencia is the main bus station in the city. The Valencia bus station services destination around Spain as well as to France. Centrally located it is with in a short walking distance to the city centre. While a large and expansive city, Valencia is a pedestrian friendly city. Dedicated bike paths are common around the city. The public transport system in Valencia is user friendly and provides access to points around the city and further out, including the port. The system includes both bus and underground Metro train service. A ticket for the Metro costs €1.50 to travel one zone within the Valencia metro map. A Bonometro pass provides unlimited rides for a 72 hour period. The cost is €22. It can be purchased at most Metro stations.

Available for purchase online and at tourist offices around the city, the Valencia Tourist Card is a worthwhile investment when visiting the city. The card offers free or discounted admission to museums and attractions around Valencia. The Valencia Tourist Card also provides up to 50% discounts at participating shops and restaurants. Visitors can use the card for free transport on city buses and on the Metro, including trips to the Valencia Airport. Available in 24, 48 and 72 hour increments, the card cost from €15 to €25.

FAQs – How To Visit Valencia Spain

Is Valencia worth visiting?

With a mix of sunshine, great food, and stunning architecture, Valencia is absolutely worth visit. Valencia is a pedestrian-friendly city making it super easy to explore as well.

What is Valencia famous for?

Lots of cities are known for one dish and you can put Valencia on that list. Paella, the Spanish rice and seafood dish was created in Valencia. It’s what people think about when they hear the name Valencia and it’s THE place to eat it.

Is Valencia, Spain an expensive city?

Compared to larger cities like Madrid and Barcelona, Valencia is a fairly affordable city. Restaurants offer a “menu del dia” or menu of the day which features 3 or 4 courses for $10-15. The city has a range of accommodations from high-end to budget.