Our ultimate list of the best Japanese snacks to try when traveling to Japan or to buy online. Our list includes both sweet and savory Japanese treats.

** This post contains compensated links. Find more info in my DISCLAIMER. As an Amazon Associate, I earn from qualifying purchases.

Where To Buy Japanese Snacks Online

Not everyone can travel to Japan, although we do recommend it. Over the years it has become one of our favorite places to travel for food. We continue to find new destinations within Japan to learn more about the food. Most recently, we traveled to Wakayama and Sapporo, which is known for some tasty Japanese treats. When visiting Japan, these treats and snacks make some of the best souvenirs too.

If a flight to Japan is not in the cards, it’s relatively easy to buy some of the most popular snacks in Japan online. One of the best places to order Japanese snacks online is actually Amazon. Almost every snack, treat, or candy on our list can be found on Amazon.

Want to learn more about Japanese food? Check out these posts about eating in Japan:

Kyoto Food Guide – What To Eat In Kyoto

15 Of The Best Japanese Snacks

Here are our recommendations for the top Japanese snacks to try, either by ordering them online or finding them in Japan. You can buy many of these snacks as souvenirs at the airport with easy access, although the prices will be higher.

The best place to shop in Japan is to look for Japanese snacks at the 7 Eleven or other convenience stores like Circle K or Lawson’s. Even better, look for a full-sized supermarket where the options are greater and prices are lower.

Interesting in learning about unique snacks? Check out our recommendations for the Best Korean Snacks To Try.

Since 1966 Pocky has been one of the most popular snacks in Japan. A long, thin biscuit covered in chocolate, Pocky Japanese Snacks come in a variety of flavors including green tea, honey, and our personal favorite chocolate banana.

Pocky’s popularity has spread outside of Japan to most of Asia, Europe and even North America. Its size makes it the perfect snack to take while traveling, especially during long bus or train rides.

First launched in 1984, Lotte Koala’s March is as tasty as they are adorable. The Lotte company is a South Korean hotel brand, but the Lotte candies and snacks are super popular in Japan too.

These bite-sized snack cookies come in over 10 flavors. The most popular flavors are strawberry (our favorite) and chocolate. If you want to try something different, keep an eye out for the caffe latte and soft ice cream versions.

Koala’s March are handy to keep around for a quick snack or when traveling. Best of all, the company helps support the Australian Koala Foundation. These have to be some of the cutest Japanese snacks. 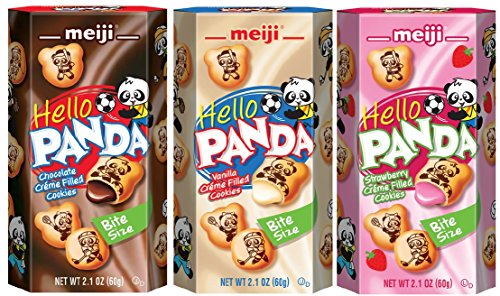 Thanks to their shortbread crust, Hello Panda Cookies are rather filling compared to other Japanese cookie snacks. You can find them in supermarkets as well as convenience stores like Lawsons and 7-Eleven all across Japan. 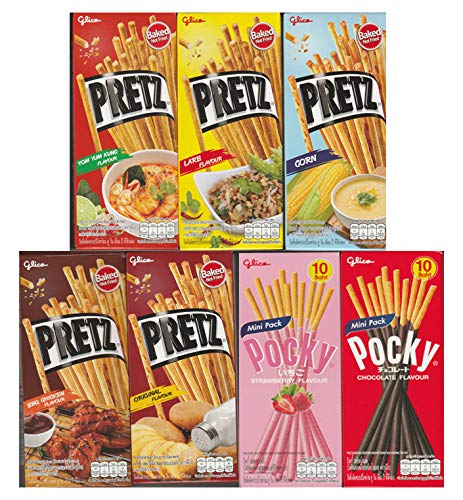 From the same company that makes Pocky, Pretz are thin, salty, pretzel-like sticks making them a popular Japanese savory snack. They are made by Glico, the company that has the famous runner man fluorescent advertisement in Osaka

Instead of being dipped in chocolate like Pocky, Pretz is covered in various seasonings. The number of available flavors of Pretz is mindblowing. This is one of our favorite things about them. There’s a flavor to match all tastes at all times. Some of the more unique include “Roast,” “Purple Potato,” and of course, “Spicy Squid.” 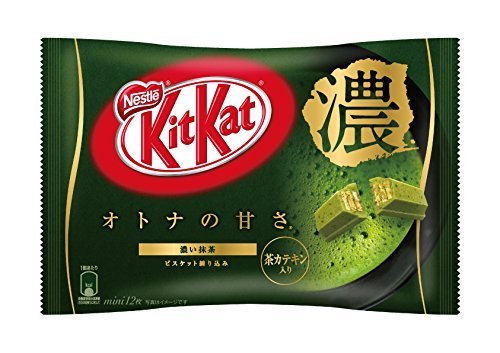 For many travelers to Japan, these are the best Japanese candy to try when in the country. There are over 300 varieties of Kit Kat available in Japan. That’s right 300!!!

First introduced in 1973, Japanese Kit Kat has surpassed Japan’s Meiji Chocolate as the top chocolate brand in the country. Some of the 300 flavors make sense like Strawberry Kit Kat. After all, who doesn’t love chocolate and strawberries?

Others make you stop and think if that should even exist like Corn Kit Kat, Ginger Ale Kit Kat, and Cantaloupe Kit Kat. Then there are the uniquely Japanese flavors like Green Matcha Tea, Edamame, and best of all, Sake Kit Kat. Exploring these different flavors is always fun when you are exploring Japan. 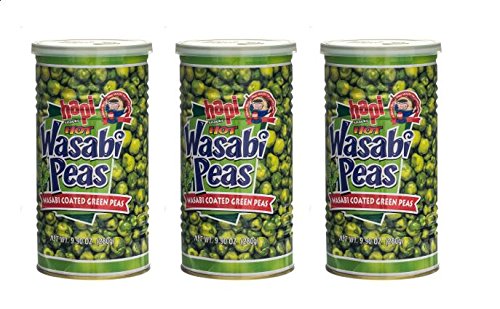 Fewer food items are more quintessentially Japanese than wasabi. Most commonly associated with sushi, wasabi is similar to horseradish. It has a potent taste that many love and just as many dislike. Given the creative nature of food producers in Japan, it was only a matter of time before wasabi peas were invented.

Wasabi peas are the perfect Japanese spicy snack for those who enjoy the heat. We love them with a cold beer. In the United States, spicy corn nuts would be the closest comparison, but no other food snack can compare to Japanese wasabi peas. 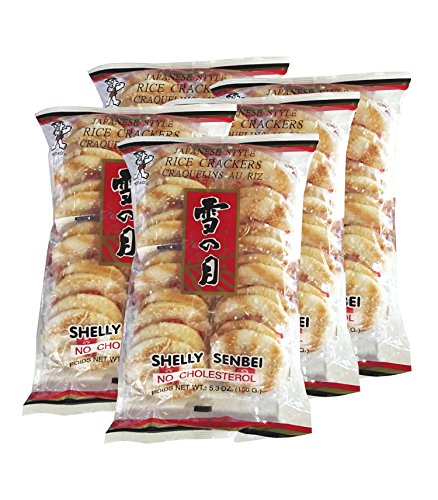 Today,  senbei can be enjoyed at all times and are far different from the original. Baked, not fried, senbei are free from cholesterol and gluten and suitable for vegetarians. This makes them the perfect Japanese healthy snacks.

Like many traditional Japanese snacks, senbei comes in a variety of flavors including kimchi, wasabi, and curry. We first started eating senbei when we lived in Bali. They were a nice snack to have at home or when we’d go on a road trip. Although you’ll need something to drink to wash them down, they are one of the best Japanese rice cracker brands.

Take cut pieces of senbei (soy-flavored rice crisps), add in some peanuts and what do you have? Kaki no tane. A popular Japanese bar snack usually enjoyed with beer, Kaki No Tane is the Japanese equivalent of an American bar snack mix.

It can be difficult to find at bars in Japan. If you want to try Kaki No Taine, you are better off heading to a supermarket or convenience store like Lawson or 7-Eleven. Kaki No Tane comes in a variety of flavors like wasabi and pepper.

Invented in Tokyo in 1914, Dorayaki is another Japanese sweet snack food to try. Two pancake-like layers of castella (sponge cake) sandwich a filling made from azuki (red) bean paste.

Not being a fan of azuki bean paste, this is not a particularly favorite Japanese snack for us but it’s super popular with locals and tourists alike. Regional variations of dorayaki can be found throughout Japan. In Kansai, a slightly larger version called mikasa is popular. 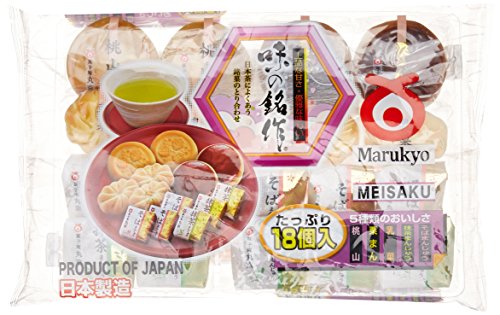 Another Japanese snack using azuki bean paste is Manju. Made using flour, rice powder, and buckwheat, Manju is very similar to the ever-popular mochi. Manju and mochi share a similar size and texture. They are both filled and come in a variety of flavors.

It’s believed that Manju was brought to Japan from China back in the early 1300s. Unlike mochi, Manju are not frozen but rather kept at room temperature making them a more convenient Japanese snack food than mochi. 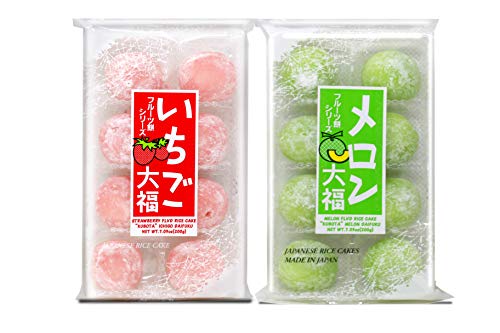 If you are looking for good luck, eat daifuku. The name literally translates to “good luck” in Japanese. A culinary cousin of mochi balls, daifuku are small round glutinous rice cakes.

Historically, daifuku were given as gifts at special ceremonies. Today they are easy to find in shops and supermarkets to be enjoyed any day of the week. 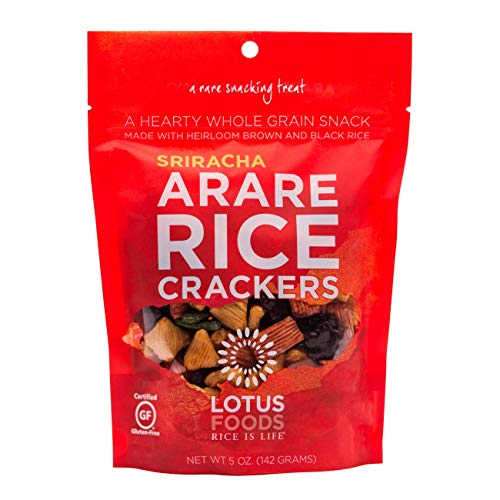 Made from glutinous rice and seasoned with soy sauce, arare are bite-sized Japanese cracker snacks. Cut to look like snow pellets, Arare come in numerous shapes and sizes. Arare is enjoyed like Kaki No Tane, as a bar or a Japanese beer snack.

Fear not, there’s no need to visit a bar to enjoy arare. They are sold all over Japan. On each March 3rd, Arare are consumed to commemorate the Doll Festival in Japan. During this special occasion, the Arare are colored in bright shades of pink, yellow, and light green. 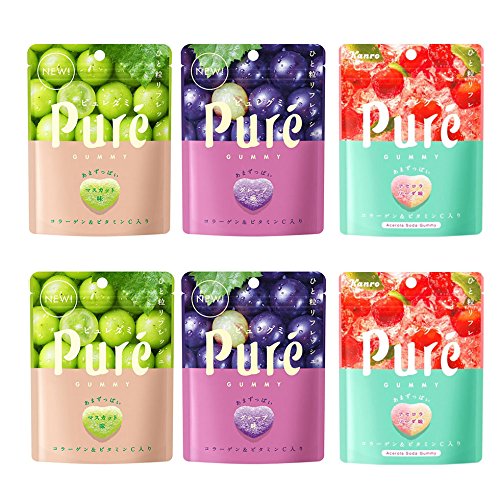 The Japanese have a profound enjoyment of all things sour, including gummies. Gummies are very popular across Japan and can easily be found in any supermarket or convenience store.

If you can name the flavor, odds are you’ll find that flavor in a gummy. The Japanese Kanro Gummy has to be one of the most popular Japanese candy brands. 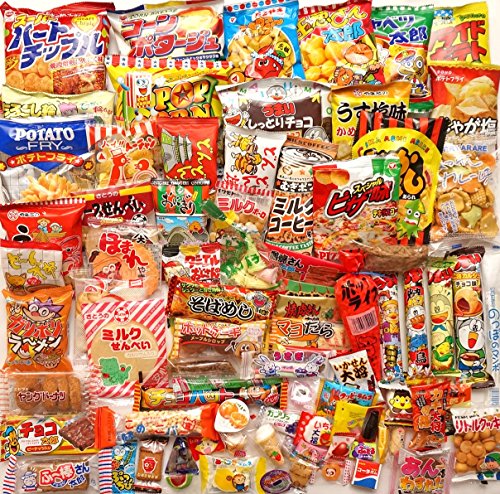 The Japanese equivalent to American “penny candy,” dagashi is designed and marketed to Japanese children. Dating as far back as the 17th century, dagashi has evolved from simple corn treats to today’s modern array of treats.

Everything from the packaging of dagashi, cost (as low as $0.20) and location of stores, usually near schools, is targeted to children. The types of dagashi is virtually endless. Everything from gum, hard candy, and even ramen can be considered dagashi. 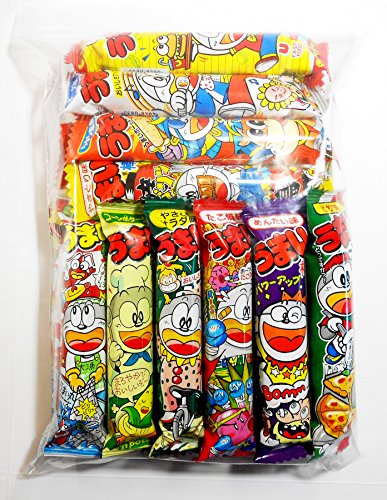 One of the more unique Japanese snacks is umaibo. Translated to “delicious stick,” umaibo is a small, puffed, cylindrical corn snack. For me, it’s like an empty Mexican flauta.

Similar to nearly every Japanese snack, umaibo come in a variety of flavors, both sweet and savory. Some of the more popular flavors include cheese, caramel, chocolate. These are great snacks with a cold drink, for long rides on the train, or simply when you are hungry.

Looking to cook Japanese food at home? Check out these Japanese recipe posts:

Several popular Japanese snacks feature seaweed and soy. Both of these ingredients are packed with vitamins and minerals. However, many popular snacks are fried and full of preservatives.

Where can I buy cheap Japanese snacks?

What snacks do Japanese kids eat?

Japanese kids are similar to kids around the world when it comes to snacks. They love salty snacks, sweet snacks, and chocolate snacks. One of the most popular Japanese snacks kids enjoy is almond fish, a blend of almonds and slightly salted sardines.