This chorizo stuffed mushrooms recipe makes the perfect modern Spanish tapa. Perfect for snacking or as a starter, these chorizo mushrooms are a touch spicy and super creamy.

**This post contains compensated links. Find more info in my DISCLAIMER. As an Amazon Associate, I earn from qualifying purchases.

Tools For This Recipe:

Check out our Spain Food Guide – What To Eat In Spain for more details on regional must-try dishes in Spain.

Mushroom and chorizo goes so well together. There’s something about the creaminess of the mushrooms when cooked, and the texture of the chorizo that is so flavorful. Then, add in some goat cheese, and these stuffed mushrooms are finger-licking good.

These are also low carb stuffed mushrooms, particularly because I don’t use any flour or breadcrumbs in the stuffing. The goat cheese holds the stuffing together.

If you are strictly gluten-free, though, double check the brand of chorizo you are using. Ensure that they are gluten free. Quality chorizo doesn’t have any sort of bread or additives in it, but just be safe and double check.

I love cooking these chorizo stuffed mushroom tapas in a cast iron skillet. There are a few primary ways to cook stuffed mushrooms. Because you should cook the stuffing beforehand, most recipes have multiple steps.

The stuffing can be cooked in a saute or frying pan. Then, you can stuff the mushrooms and cook on a baking sheet in the oven. Or, you can even put them in an air fryer. But, the better way, in my opinion, is to do it all in one pot.

We have the Uno Casa Cast-Iron Skillet Set. The skillets come pre-seasoned. Using cast-iron helps to distribute the heat evenly when cooking. Then, the Uno Casa Skillet can go right into the oven. It even comes with silicone handle covers to make it easy to move the skillet.

Use this link to save 10% on all Uno Casa products. Discount applied at checkout. Button mushrooms are the perfect mushrooms for a Spanish tapa because they are more-or-less bite-sized. Remove the stems from the mushrooms and dice the stems so that they can be cooked in the mixture.

The stems of the mushrooms are cooked in olive oil along with minced or pressed garlic, onion, and red pepper. All of the vegetables should be diced small so that they blend well into the stuffing. I use a garlic press so that the garlic is pressed well and doesn’t end up having big chunks of garlic in the stuffed mushrooms in the end.

You can use green pepper, but red pepper is preferred because it adds some sweetness. Green pepper can have a bit of bitterness.

Any soft goat cheese will work, but it should not be too pungent. It works best if you can take the goat cheese out and get it to room temperature before blending.

There are a few types of chorizo. The best for this is a typical cooking chorizo, which is easy to find at most supermarkets. Just be sure it is gluten-free if you are. And, this recipe is made with Spanish chorizo, not Mexican chorizo. There is a big difference! You can buy Spanish cooking chorizo on Amazon. Remove the chorizo from the casing so that it blends well into the mushroom mixture.

How To Make This Chorizo Stuffed Mushrooms Recipe 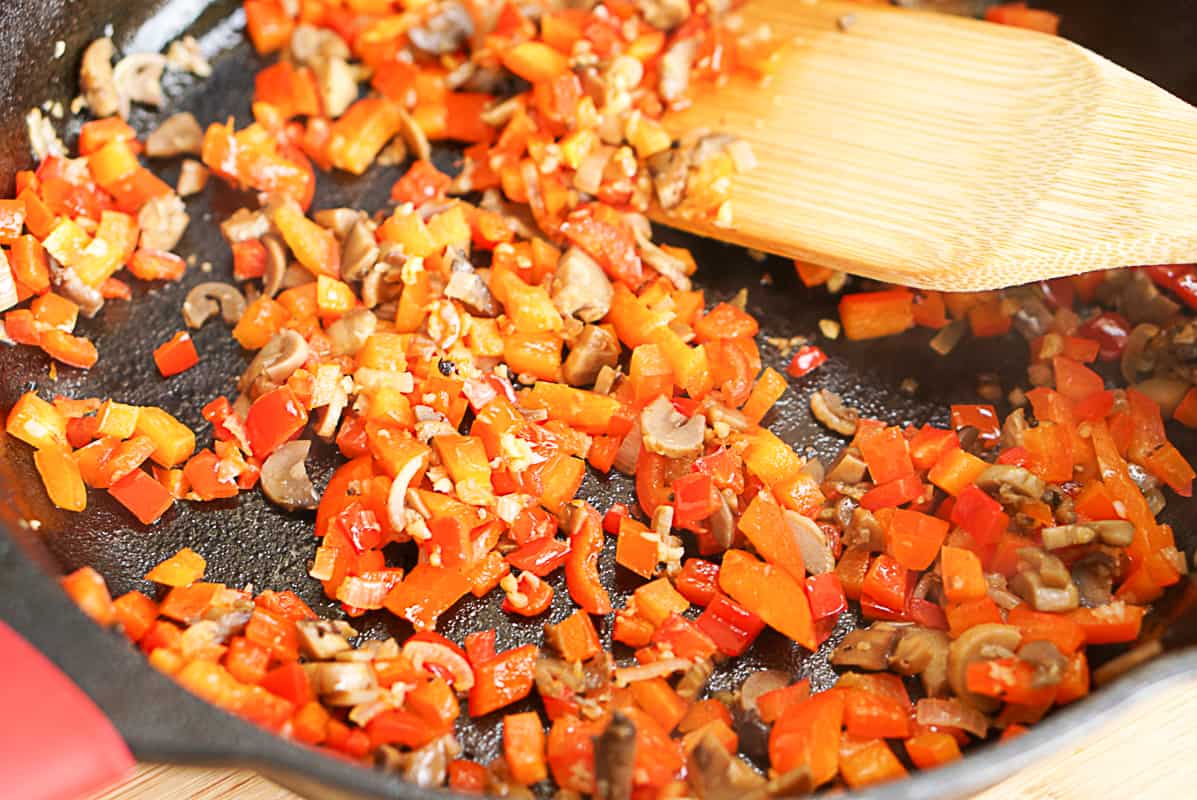 These chorizo and cheese stuffed mushrooms are pretty easy to make, in only one pot, a cast iron skillet.

Preheat the oven to 350F. Using a cast iron skillet or saute pan, add the olive oil, garlic, onion, and mushroom stems and place over medium heat. Season with salt and pepper.

When the onion starts to soften and yellow, but before the garlic turns brown, add the diced red pepper. Cook for about 5-7 minutes or until the pepper softens.

Add the diced chorizo and cook 2-3 minutes or until the chorizo is warmed through.

Remove the chorizo mixture to a mixing bowl. Add the goat cheese and blend with a rubber spatula until mixed well.

This nutritional data is provided by a third-party source and should not be relied on if you are on a strict diet.

Did you make this recipe?

I prefer using button mushrooms when making a tapa portion, but you can also make chorizo stuffed portobello mushrooms. In this case, it will take an extra 5 or 10 minutes to cook in the oven because the mushrooms themselves are bigger.

As mentioned above, you can also make air fryer stuffed mushrooms. Cook them in the air fryer for 7-8 minutes at 350 degrees.

If you can’t find the right kind of chorizo, you can also make sausage stuffed mushrooms using regular Italian-style sausage. Remove the sausage from the casino and cook it the same way.

For those of you who love chorizo like we do, make sure to try our Spanish chorizo and bean recipe. It’s perfect for a cold Fall or Winter day.

What are stuffed mushrooms made of?

Stuffed mushrooms come in a variety of styles. At their core, you need mushrooms, cheese, and spices to be considered stuffed. But really at the end of the day, it’s whatever you want to include.

What country is stuffed mushrooms from?

It’s believed that Italians created stuffed mushrooms sometime in either the 19th or 20th century. There are no exact records but the Italians have a history of stuffing various vegetables such as mushrooms.

Skip to Recipe
We use cookies to ensure that we give you the best experience on our website. If you continue to use this site we will assume that you are happy with it.OkPrivacy policy